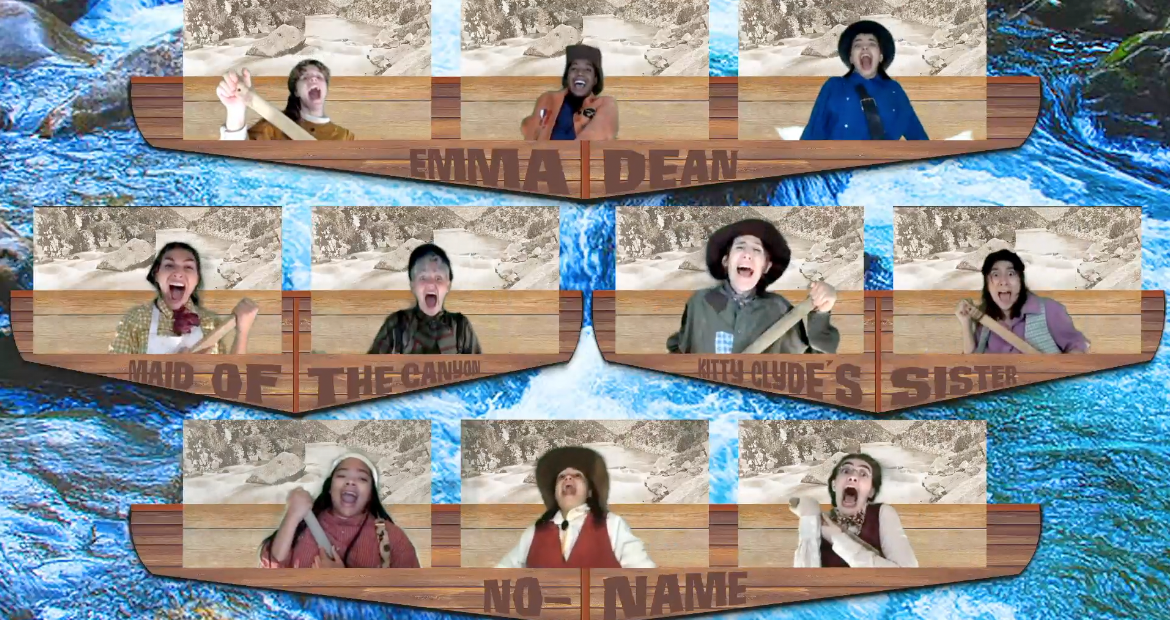 Virtual Theatre: Crewing with the MEN ON BOATS

When I first transferred into Fordham Theatre, a rush of panic shook me to my core after the initial wave of accomplishment and joy. I had just declared a major in theatre during a global pandemic where the future of theatre itself remains unclear. I thought about all the stories I had heard from students, like staying up till 3 am together working on a short piece of choreography or establishing a found family during a run of a mainstage show. Surely, thanks to COVID, I would never be able to claim those stories as my own. Would shows even be happening? What will theatre look like through a roster of exclusively online classes that are to be taken at my home in New Jersey with my horrid wifi? I didn’t want to stop and consider these questions, but my anxiety gave me no other choice. I was skeptical about my decision to transfer into Fordham Theatre and about pursuing theatre in general, but after my time on crew for Men on Boats, I’m confident that theatre will come back stronger than ever before.

A typical requirement for a theatre major is to achieve lab hours by working on Studio Productions (shows entirely run by students) or a mainstage show (produced by the university and typically facilitated by guest talent). Lab hours was usually the time to discover a newfound love for a new aspect of theatre, grow close to theater kids from every year and to be chugging down energy drinks to stay awake during late nights. Considering I’m currently an online student from home, I thought this opportunity wouldn’t exist. Until I was assigned to run crew for Fordham’s first mainstage show of the academic year and one of their first entirely online productions in the history of the program.

For run crew, I was only given one responsibility, since the team really had no idea what to do with those assigned for lab. Before each rehearsal and performance, each member of run crew was assigned to an actor and had to go through a check-in regarding costume, props, and tech requirements. Even though this wasn’t super demanding and interactive, I felt like I established a connection with my assigned actor through the weeks I ran our virtual ritual together. She was super sweet, approachable, and made me feel like I had a veteran in the program rooting for me when I return to campus. After these check-ins, crew members were always encouraged to stay for the full rehearsal and share their thoughts in a private text channel through Discord. Attending these rehearsals changed my mind about the transformative experience of online theatre.

Some aspects of theatre stayed the same, like costuming and shared props. Most portions of the show were performed live from each actor’s bedroom, but the more action-heavy scenes like riding the boats were pre-recorded. It was so fascinating seeing the creation of both pre-recorded and live content through rehearsals. Not to mention that online theatre forced the crew to think outside the box! With the help of collage art and stop-motion, pre-recorded and live scenes transitioned flawlessly. Plus, there was even a music video about whiskey in the middle of the show! Finally, the moment that proved it to me was during the final monologue. The green screen gradually grew greener and each actor slowly changed out of costume. When the green screen was perfectly green, they took their devices and adjusted their cameras to show off their green screen within their bedrooms. That moment made me realize how emersed I found myself through online theatre despite sitting on my couch instead of a theater in NYC.

The magic of theatre never goes away, no matter the form. It merely evolves.