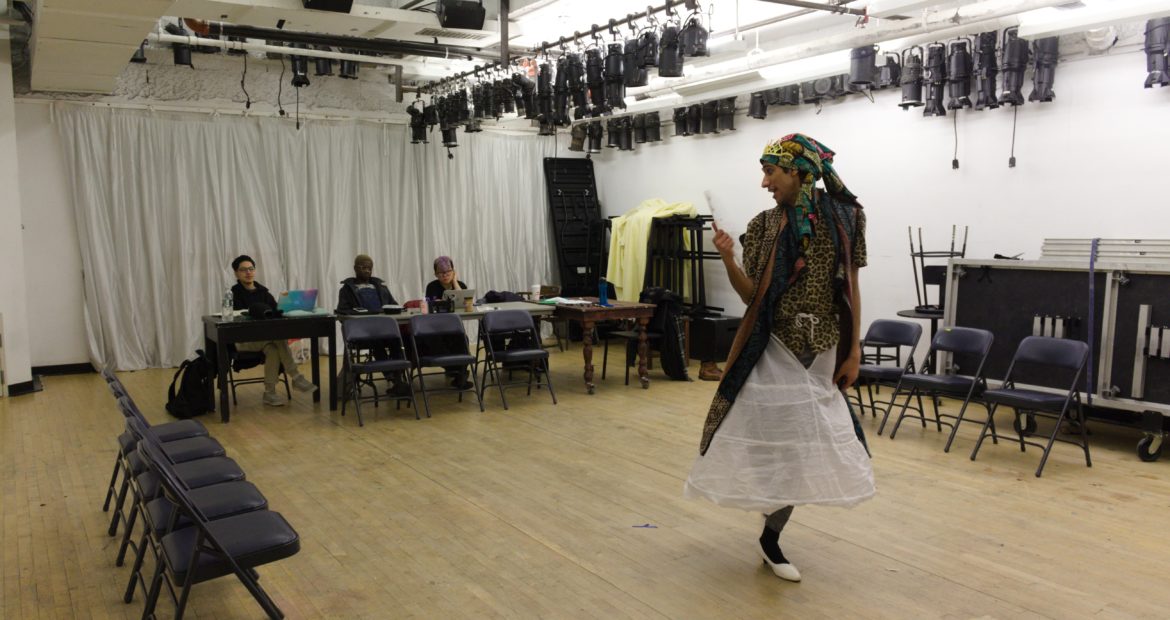 This semester, two performance majors present original pieces in White Box: My Papier-mâché Monster and Coincoin: Queen of Louisiana. Developed from ideas examined in the classroom and workshopped as part of the Spring 2020 Studio Season, both productions grapple with themes of identity, the Black experience, and reclaiming ownership of your own narrative.

My Papier-mâché Monster stars performance major Eliana Rowe ‘20 confronting the demons of depression and anxiety, theatricalized by an ensemble of movers. “‘I was interested in exploring nightmares and demon possession,” explains Rowe, laughing. “Just because that’s something that I’ve encountered in my life, because I grew up in a very religious home.” Coming to college, and embracing her queer identity as a Caribbean Pentecostal Christian, challenged her to reconsider the ideas she had always subscribed to. “[I started] to understand what my beliefs are and if they actually [aligned] with the beliefs I was taught.”

The creator of Coincoin: Queen of Louisiana, performance major Wayne Babineaux ‘20 found inspiration his sophomore year in a class called Being and Becoming Black with professor Laurie Lambert, when he had to interview a person in his family about their history and heritage. He chose his grandma, Marie Nadine Babineaux, who he knew had an interest in genealogy. “All of a sudden she started telling me about this amazing woman named Marie Thérèse dite Coincoin, an African princess living in Louisiana in the 1700s,” says Babineaux. “I was like, what, why have you never told me about this?”

Babineaux never thought about embodying Coincoin until movement class with professor Dawn Saito pushed him to explore his ancestry through performance. Inspired by the stories told to him by his grandma and in “Isle of Canes”, a novel by Elizabeth Shown Mills, he devised a short piece that would become the basis for Coincoin: Queen of Louisiana. “Oh, wow! I can play her,” thought Babineaux. “This is amazing.” 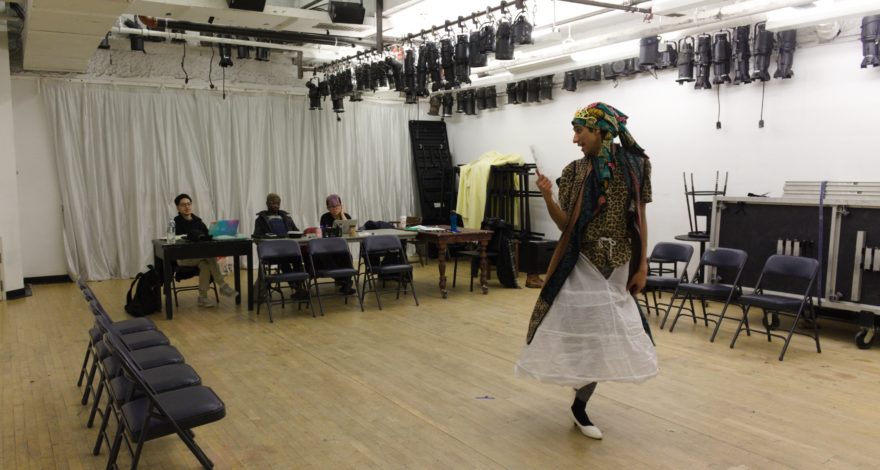 From idea to studio show

“A lot of the process ended up feeling a lot like collage,” says Rowe, who began piecing together a full narrative from old poems she had written in late-night journals. Expanding on a ten-minute one-woman show she had created for professor Daniel Alexander Jones’s solo performance class, she wanted to find a way to portray the experience of living with depression, and battling the “demons” and voices. “What I felt was going to be a really small, insular process became a really big collaborative epic.” She credits the ensemble of movers for the synergistic, collaborative nature of rehearsal (“It’s like going back to Collab II!” she says). “You can have expectations of the work, but then you have to allow yourself to be freed up to let the piece rest on you and work on you while you work on it.”

As he researched Coincoin, Babineaux found meaning in the unexpected parallels between them. “When I learned about [Coincoin’s] story, it was so impactful to me because a lot of things I’ve gone through in my life felt very similar to what she went through,” he says. “I started writing songs inspired by her life and my life and relating them together.” The first song was “Queen I Am”, a funk-inspired anthem which is also the first song in the show. (One song that appeared in an early draft? A cover of “Supermodel” by SZA.) He spent all summer writing material and rereading “Isle of Canes” as the piece took on different forms, at one point even developing into a full spectacle-heavy musical. “I read scenes from the book out loud, then tried to tell it from Coincoin’s first-person perspective. Then, I would take audio files and transcribe them,” says Babineaux. “I whittled it down to just me and the piano, just me and Coincoin speaking, and that was the piece.”

“I’ve had to put myself first, and that’s not something that I think about as an artist,” says Rowe, citing the most difficult part of her process. “Sometimes when I think about me doing my own solo work, I’ve had to detach from the idea that doing that is [self-indulgent] or me taking up too much space. It’s not [self-indulgent] if you’re giving space for a conversation.”

“Autobiographical work requires a lot of compassion, and I’m really good at giving that to other people, but the challenge has been to give that to myself,” she says, touching on the themes of mental health—particularly Black mental health—in My Papier-mâché Monster. “In my community, it’s still a struggle to end the stigma.”

“Something really special and spiritual was happening” as he began rehearsals, says Babineaux. “I definitely feel that [Coincoin] lives with me.” Babineaux connects the idea back to the Yaruba belief of ancestor reincarnation through descendants. “Every time I do this piece, I’m calling on her spirit to guide me and help me through the performance.”

“The fact that it’s happening in February feels really sacred,” says Rowe, referencing Black History Month. “You have to archive your story because other people will not do it for you, and there’s probably a lot of other people out there who are feeling the way you are.” 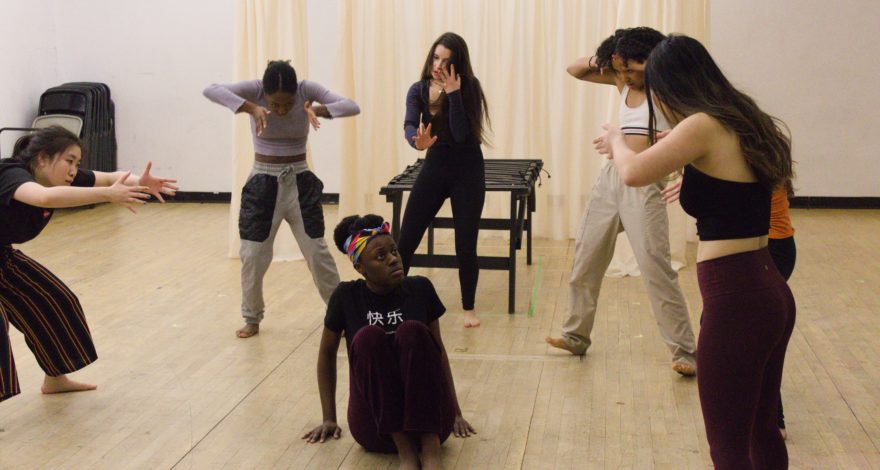 For both Rowe and Babineaux, their shows are a chance to share untold narratives.

“A lot of my first experiences here at Fordham were working on pieces that were directed or written by artists of color, which I thought was really dope, but what’s interesting is that I kind of found that I was telling stories that weren’t my stories,” says Rowe. Though she felt linked by lineage and legacy, Rowe craved the opportunity to work on a perspective she more closely resonated with.

“Your whole identity and existence is not a monolith. It is not a picture book. It’s a whole abstract drawing,” says Rowe. “I learned the phrase [reparative narratives] in my Queer History class, [which means] going back to the root of the story and taking away the monolith, and adding the depth of the actual story that the person experienced. It helped to have it in that educational and intellectual standpoint to engage the work because it gave words for things that I was attempting to do, but couldn’t verbalize quite yet.” She looks to artists like Ntozake Shange and Suzan-Lori Parks as inspirations. “It’s not just about telling the story, it’s about changing the story. We can change the nightmare, and recover.”

Babineaux relates the feeling to “Unrecognized”, the second song in the show. “Everyone has a side to themselves or something inside of them that they don’t get to show the world sometimes.” He reiterates Coincoin’s message from the show: “If you live your life with integrity, and you empower yourself to do what you know you need to do, eventually you will be remembered and someone will recognize you.”

Following a weekend of performances in White Box, Babineaux has plans to tour the show all over the world: the Edinburgh Fringe Festival, his hometown of Houston, and even Natchitoches, Louisiana, where Coincoin lived. “You could do anything in the solo form, just like you could go up to anyone and ask them about their life, and they could tell you anything that has happened to them,” notes Babineaux. “The only limitation is how far you want to go as an individual.”

“It’s important to make space for your own story, because that ignites conversations between people,” says Rowe. “It’s really vulnerable and scary, but I’m really happy that I’m taking this jump and this leap of faith.”