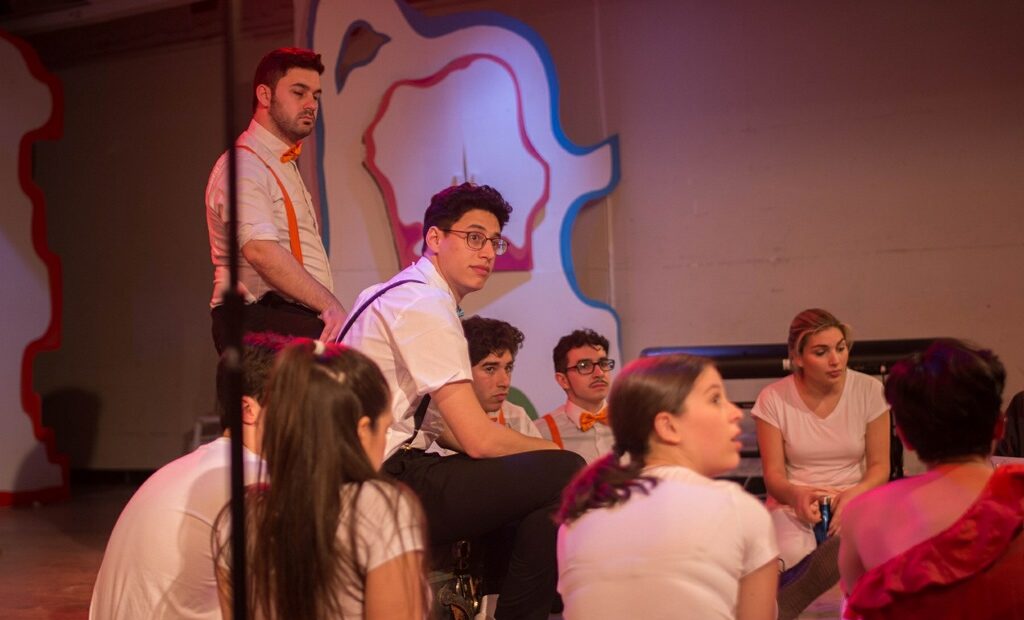 Have an Idea That Terrifies You? You Have to Do It

This blog post was written by Franco Giacomarra, Playwriting Class of 2019.

The defining moment of my senior year at Fordham began with a panicked phone call.

It was 6pm, and I was just leaving my work study job as I nervously dialed Daniel Alexander Jones: performance artist, educator, and head of the Playwriting Program (aka the person who was supposed to make sure that my senior thesis project—the culmination of four years as a Fordham Theatre playwright—did not devolve into a hot mess.)

During this particular semester, Daniel was writing and performing in an Off-Broadway show, travelling for some speaking engagements, and teaching a handful of theatre classes.

In other words, the man was extremely busy.

I had emailed Daniel two hours earlier, expressing that I would love to get on the phone with him if he had a chance since I had a rather pressing situation approaching. I was starting rehearsal in a matter of days.

My nervousness subsided somewhat when he answered the phone. He surely had better things to do, but you couldn’t tell from the way he patiently checked in with me. This is probably (read: definitely) because he could tell I was already freaking out.

“So,” he said, calmly trying to make sense of the email I sent him two hours earlier, “This script you sent me looks… a little different than the concept I read earlier.”

“Uh, yeah,” I said to him, anticipating his reaction to the real reason for my call. “I kind of changed my entire play…”

I heard him on the other end, but still he didn’t answer, probably waiting for me to address the elephant in the room. 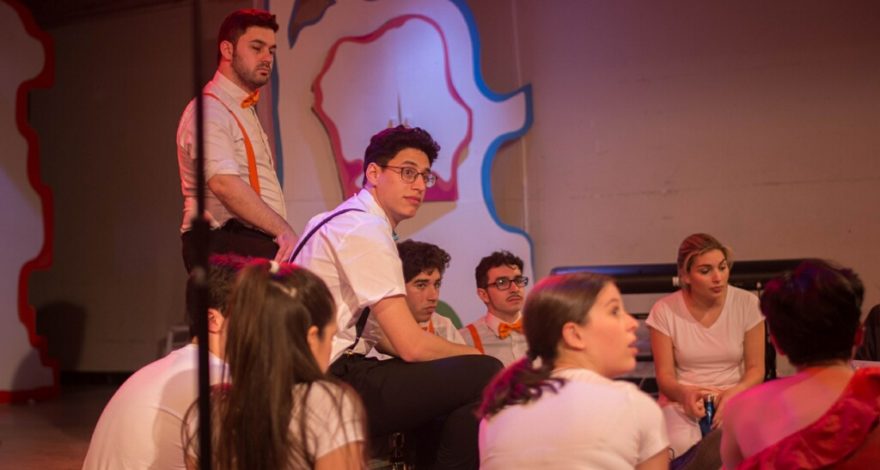 Franco Giacomarra in Where Does The Light Go?. Photography: Amelia Sorensen.

If you’d asked me what my senior thesis play was about six months earlier, you would get the stock answer that I had prepared for everyone who had unwittingly asked my absolute least favorite question. My thesis was entitled The Cave, and it was a post-apocalyptic concert musical about the importance of memory, the nature of collectivism, and how communal experiences form the backbones of societies.

But this was the point as far I was concerned. From an academic standpoint, it was airtight: big questions for a big senior thesis. All I had left to do was solidify some characters, write some songs, and connect the dots by collaborating with the uber-talented director and designers I had at my disposal. At first, I thought this would be great. I even did a reading with some friends and got some useful feedback from peers and teachers. The results seemed promising, but eventually everyone seemed to ask the same question:

That’s cool and all… but like why? What’s the point of it all?

For the longest time, I couldn’t muster up a satisfactory answer. But true to form, instead of facing it head on, I ignored it and focused my energy on throwing myself into yet another fiery cauldron of fear. On a whim I had surprised everyone (including myself) by signing up for Daniel’s solo performance class.

Unbeknownst to me, this would be the key that unlocked everything.

Solo performance is a unique art form in that it requires an immense amount of vulnerability to create and perform for an audience without the crutch of others to lean on. It’s just you, your actions, and your words. For the actors in my class, it was a challenge they were eager to measure themselves against. For those like me who had never set foot in a Fordham acting class? It was downright terrifying.

But this was the Fordham way, to venture out and see how learning different disciplines within your artform could actually inform and transform your own work as an artist. And so I stuck with it.

As petrified as I was during my first few go-arounds of solo performance, eventually I began to pay less attention to my fear, and more to the fact that I was in a safe creative space, with people whom I had been cultivating a collaborative environment alongside for the last four years of my life. It didn’t drain me as it feared it would; rather, it energized me in a way that was wholly surprising.

My solo piece ended up being about my family and the myriad of different fears I had about losing them: their presence, their memories, the culture they passed on to me.

To write and perform from such a personal space was extremely gratifying. Rather than thinking of other characters, settings, or plots to latch on to, I had to go inward and ask what story I could draw from within myself. In the short span of a single semester, I had finally managed to realize for myself what my teachers and mentors had been trying to impart to me for the last four years.

As hard as it would be, I knew that I couldn’t go backward.

And that meant there would be a lot of work to do.

When I told Daniel on the phone I had a change of heart—that I wanted to center my thesis on the work I had developed in my solo performance piece, and wanted to perform alongside my cast—he didn’t flinch or chastise me for taking such a drastic turn at the final hour. Instead, he encouraged me to follow my gut.

Over the next hour, Daniel talked me through the process of combing through the meager document I had started, and doing the work of fleshing it out enough so that my team could begin to work with it in our first rehearsal that Monday.

Was it possible to put together a polished script ready to rehearse in that amount of time? Not even close. So this project would require a different rehearsal method altogether.

Instead of a fully complete document, I came to the first rehearsal with a roughly-outlined script that would change as we went along. Whatever I brought on a given rehearsal day—a scene, a song, an image—that would be our text for the evening and we would play from there. This made rehearsals fun, but also wildly unpredictable.

I’d love to say that this process was free-flowing and inspiring at all times, but that would be to ignore the truth. I regularly found myself frustrated, uncertain and constantly questioning what I was doing. Some rehearsals we’d simply sit and spend hours trying ten different ways to sing a single song. This often resulted in me doing all I could to prevent myself from gouging out my own eyes so I didn’t have to look at the mess I was creating in real time.

But at the behest of Daniel, my incredible director, the cast, the stage management team, and all of my peers, I never thought about throwing in the towel. If there was one thing I benefited from most, it was that I was completely immersed in an environment that emphasized the importance of this kind of exploration. Throughout my years at Fordham,it had constantly been hammered into me that the process was the thing to fall in love with, results be damned. That was the philosophy, so I was doomed to stick to it come what may. 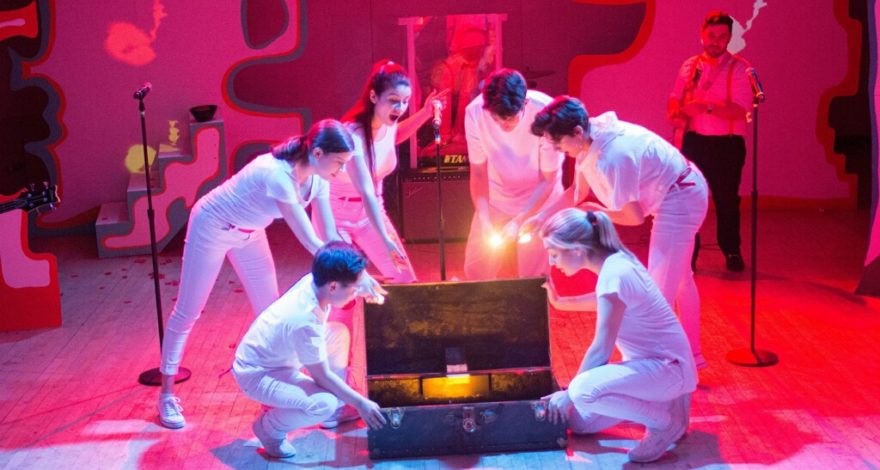 Franco Giacomarra in Where Does The Light Go?. Photography: Amelia Sorensen.

In the end, I should have known that, much like the journey, the endpoint was something I never could have predicted. All these ideas that swirled around in my head about the importance of remembering and preservation? Turns out they weren’t about a cave and a post-apocalyptic society; they were the fears and desires from deep within me that I’d never had the courage to confront before.

And sure, it would have been nice to have a title earlier than three days before opening, or to be done writing songs before we had teched the entire show. But that wasn’t what this process or this story needed. Learning to recognize that and, more importantly, being willing to surrender myself to it, was the only way I could have done a senior thesis that was as meaningful and fulfilling to me as I had hoped it would be.

So that idea that you keep pushing aside because you think it might be too hard or too scary? Dig it out. It’s time to get to work.

Where Does The Light Go?, written by Franco Giacomarra, was presented as part of the Fordham Theatre Spring 2019 Studio Season.